The 2019 fall migration banding season at the Kiawah Island Banding Station (KIBS) ended on Saturday, 30 November. We banded at two sites on Kiawah Island again this fall:  Captain Sam's and Little Bear.  This was the 11th consecutive year of fall migration banding at the Captain Sam's site with banding occurring daily during the last 8 years.  It was the 5th season for the Little Bear site which we initiated during the fall of 2015.  The two sites are located at each end of island about 8 miles apart (Captain Sam's on the west end, Little Bear on the east end).  Both sites are situated in coastal scrub/shrub and high marsh habitats, however, the Little Bear site is in an earlier stage of succession. Collectively, we banded 7,146 birds and had 1,670 recaptures of 104 different species.  Captain Sam's had an increase in the number of birds banded compared to last year while, Little Bear showed a significant decrease.  Captain Sam’s and Little Bear combined, experienced a 6% increase in the number of birds banded from last year, and a 2.7% decrease on average of the last 5 years.  Cold fronts were more numerous this year compared to last fall.  We even experienced a couple of rare August cold fronts which brought us a good number of early migrants.  Late migrants like sparrows, kinglets, and Yellow-rumped Warblers that we would normally start catching at the end of October didn’t show up until mid-November.  We had a few very busy late November days which is unusual.  Unfortunately, Little Bear missed out on this late season push because we closed it down on 14 November.

CAPTAIN SAM'S
Nets were opened for a total of 97 days from 15 August - 30 November.  There were only 11 days in which banding did not occur.  Hurricane Dorian shut us down for 7 consecutive days from 2- 8 September.  Hurricane Dorian was a strong Category 5 storm that made landfall on 1 September in the Bahamas.  The storm weakened while moving north just off shore along Florida, Georgia, and South Carolina before making landfall again in Cape Hatteras, NC as a Category 1 on 6 September.  Even though this storm did not affect the Charleston area to the degree that was predicted, the intensity and unpredictable track of the storm caused mandatory evacuations for the all coastal areas of South Carolina.   Kiawah saw substantial wind damage and some minor flooding.  The banding stations fared well except for some trees, limbs, and debris that fell in the net lanes.  This is the fourth year in a row that a hurricane/tropical storm has affected our banding.

We banded 4,586 new birds of 86 different species.  The most commonly banded species were Common Yellowthroat (1219), Gray Catbird (703) and Yellow-rumped Warbler (656).  Those three species combined made up 56% of all the birds banded this season.  After dropping to #2 last year, Common Yellowthroats were back at the top as the most commonly banded species.  Common Yellowthroats were up almost 48% from last year and exhibited a 4.7% increase from the 8-year average.  Gray Catbird numbers were down 24% from last year but only 3.6% from 8-year average.  Yellow-rumped Warbler numbers continue to show decreases and were down 16% over the last 8 years but showed a 6.7% increase from last year.

We had 1,207 recaptures which is slightly lower compared to last year.  We recaptured many individuals that were banded in previous years.  It will take a while to sort through all those records to determine how many unique returns we had as some of those were undoubtedly captured more than once during the fall.  We did not recapture any birds that were banded at a different location.

We captured three species that have never been banded at the Captain Sam's site during the fall:  Sora, Seaside Sparrow, and Fox Sparrow.  This was also the first time a Fox Sparrow has been documented on Kiawah Island! 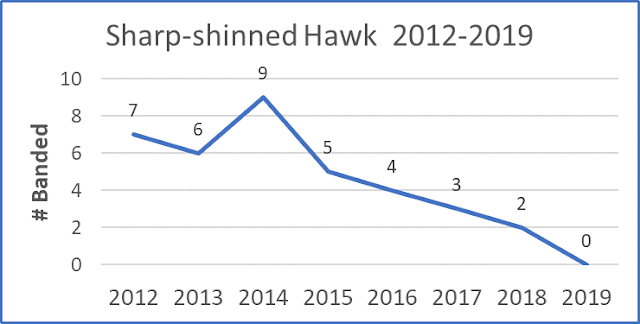 LITTLE BEAR
Nets were opened for a total of 75 days from 22 August - 14 November.  We had 12 days cancelled due to weather including an 8 day stretch from 2-9 September for Hurricane Dorian.  Wind also caused Little Bear to shut down for a few days scattered throughout the season.  After three years in a row of tropical storms and hurricanes, the Little Bear site has suffered from saltwater intrusion which has killed many of the wax myrtles, marsh elders, and Baccharis around the site.  Wax myrtles are the dominant plant at Little Bear and the reduced cover around the nets have caused the nets to become much more exposed to the elements - wind and heat being the biggest threats.  Because of this, Little Bear had to close early many days when the temperature got too warm to safely (for the birds) capture birds.  Additionally, winds with a northerly component to them affected the nets considerably.  The predominant winds in the fall are usually from the north (especially following a cold front) therefore the wind is a constant factor at Little Bear.

We banded 2,560 new birds of 78 different species.  The total number of species captured at Little Bear is actually 79 because of a Sharp-shinned Hawk that was recaptured (originally banded in 2017 at Little Bear).  The most commonly banded species were Common Yellowthroat (627), Gray Catbird (539), and Palm Warbler (210).    Those three species combined made up 54% of all the birds banded this season.  Like Captain Sam's, Common Yellowthroat numbers exhibited a significant increase (17%) compared to 2018 but showed a minuscule decrease of 0.6% over the 5-year average.  Gray Catbird decreased by 14% compared to the 5-year average and decreased 31% from last year.  Palm Warblers were up this year with a 13% increase from the 5-year average and a 15% increase from last fall.  In 2015 and 2016, Yellow-rumped Warblers were in the top three species banded.  In fact, they were the most commonly banded bird in 2016 with 659.  This year only 105 Yellow-rumped Warblers were banded and 113 in 2018.  Their numbers have decreased by 67% over the last 5 years.  This decrease can largely be attributed to saltwater intrusion that killed many of the mature wax myrtles in 2015 and 2016.  Yellow-rumped Warblers feed on the berries of wax myrtles and without that resource available a decrease was evident.  However, Yellow-rumped Warbler numbers have also been decreasing at Captain Sam’s over the same time period where the wax myrtles have not succumbed to salt water intrusion therefore there may be something else causing this population change.

Like last year, Little Bear experienced a large decrease in the number of recaptures this year compared to last year (529 in 2018 and 463 in 2019).  This is the 3rd year in a row where we have seen a substantial decrease in the number of recaptures.  Because of the more frequent and long-lasting flooding of saltwater, the wax myrtles and other shrubs cannot recover. This is probably reducing the quality of habitat to negatively affect the bird’s stopover time.

We captured four species never banded at Little Bear during the fall:  Solitary Sandpiper, Loggerhead Shrike, Winter Wren, and Nelson’s Sparrow.  This is the first time a Solitary Sandpiper has ever been banded on Kiawah Island.

ACKNOWLEDGEMENTS
Without the cooperation of many people and entities, this work would not be possible.  The success of this project relies on their commitment, and I am in a debt of gratitude to everyone involved.

First, I'd like to thank my awesome team of banding assistants (Kristin Attinger, Josh Lefever, Beth Darby, Dan Errichetti, Arcata Leavitt, and Dave Sandahl).  Their hard work over the course of this long season was outstanding.  It was a fun season and I would like to wish them all the very best of luck in the future.

And last but not least, I'd like to thank the many volunteers that donated their time to come out and help with this project.  Bill Kee, Vince Spagnuolo, David McLean, Katie Doherty, Lydia Moore, Sarah Stewart, and Michael Gamble put in many hours volunteering during times when they were needed the most.  I could always count on them to show up and help make those busy days go much more smoothly and efficiently.


Please note that these numbers are still preliminary and may change after the data is thoroughly proofed.