The 2021 fall migration banding season at the Kiawah Island Banding Station (KIBS) concluded on Tuesday, 30 November. Banding occurred at two sites on Kiawah Island:  Captain Sam's and Little Bear.  This was the 13th consecutive year of fall migration banding at the Captain Sam's site with banding occurring daily during the last 10 years.  It was the 7th season for the Little Bear site which we initiated during the fall of 2015.  The two sites are located at each end of island about 8 miles apart (Captain Sam's on the west end, Little Bear on the east end).  Both sites are situated in coastal scrub/shrub and high marsh habitats, however, the Little Bear site is in an earlier stage of succession.

Collectively, we banded 7,808 birds and had 2,017 recaptures of 105 different species.  Captain Sam's had a small increase in the number of birds banded compared to last fall, while Little Bear experience a substantial increase. Combined, that increase translated into 8.5% more birds banded. August started off relatively slow with the typical hot and humid weather. The heat and humidity continued through September but that didn’t seem to slow down migration. Steady migration continued through October before experiencing a sharp decline over most of November. For the second year in a row, tropical weather did not affect the banding station.

Nets were opened for a total of 103 days from 15 August - 30 November.  There were only 5 days when banding did not occur because of rain (9/9/, 9/20, 9/21, 11/6, 11/7). Unlike at Little Bear, Captain Sam’s can operate during windy conditions as there are some nets that are sheltered enough to open.  It is rare that wind alone will cause Captain Sam’s to completely shut down.

We banded 4,704 new birds of 94 different species.  The most commonly banded species were Common Yellowthroats (1,077), Gray Catbirds (959), and Yellow-rumped Warbler (688).  Those three species combined made up 58% of all the birds banded this season.  After a down year last year, Common Yellowthroats regained the number one spot this year after exhibiting a 22.4% increase from last fall.  However, Common Yellowthroats were still down 4.4% compared to the 10-year average. Gray Catbirds increased 6.9% from last year, and 24.8% over the 10-year average.  The 959 Gray Catbirds banded this year was the second highest total over the past 13 years. After several years of steady declines in Yellow-rumped Warbler numbers, they rebounded nicely with a 35.2% increase from last year.  However, their numbers were still down 7.8% over the last 10 years. 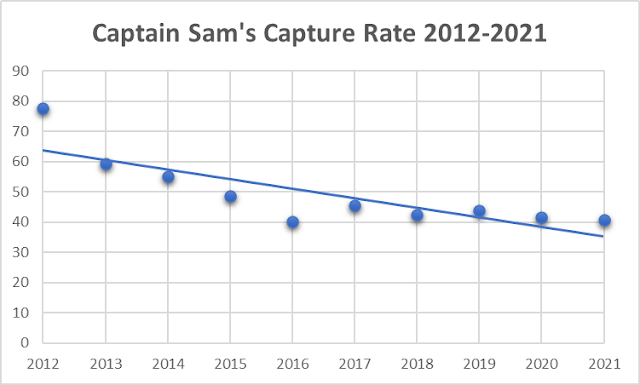 There were 13 days this fall when over 100 birds were banded compared to only 9 days last fall.  The best day of the season was on 24 September when we banded 196 birds and had 10 recaptures.  The next two busiest days occurred 10 and 17 September when 180 and 144 birds were banded, respectively. Because of the lack of strong, fast moving cold fronts, we never experienced any extremely busy days like we do in most years.  Instead, favorable winds associated with smaller low-pressure systems (“cold fronts”) created good migration conditions spread over a longer period of time.

Species notably absent this year included:  Common Ground Dove, Yellow-bellied Flycatcher, American Goldfinch, Swainson’s Warbler, Blackpoll Warbler, Yellow-throated Warbler, and Wilson’s Warbler. After a record high of 19 last fall, no Blackpoll Warbler were captured.  This is only the 2nd fall since 2012 where that has occurred.

We banded 3,104 new birds of 79 different species.  The most commonly banded species were Gray Catbirds (752), Common Yellowthroat (645), and Palm Warblers (249).    Those three species combined made up 53% of all the birds banded this season.  Gray Catbird numbers exhibited a 32.4% increase compared to last fall and 16.2% increase over the last 6 years.  Common Yellowthroat were up by 21.5% compared to last year but slightly down (0.9%) compared to the average of the last 6 years.  After a down year in 2020, Palm Warblers made a big comeback with a 70.5% increase from last fall.  This year’s numbers were also up 19.1% over the 6-year average.  Yellow-rumped Warblers increased by 12.8% this year compared to last but are still down 23% over the last 6 years.   At Little Bear, the long-term negative trend for Yellow-rumped Warblers can partly be attributed to saltwater intrusion that killed many of the mature wax myrtles in 2015 and 2016.  It’s encouraging to see Yellow-rumped Warbler number continue to increase over the last couple of years.  Hopefully, this is a sign that the wax myrtles are beginning to rebound.

We logged 8,332.6 net-hours out at Little Bear this fall – a moderate increase from the 7836.82 net-hours in 2020.  More favorable weather conditions this fall allowed the nets to be kept open longer each day.  Last year, excessive heat and/or wind caused the nets to be shut down earlier in the morning.  This was also the first full season with the three new nets that were added in September last year. 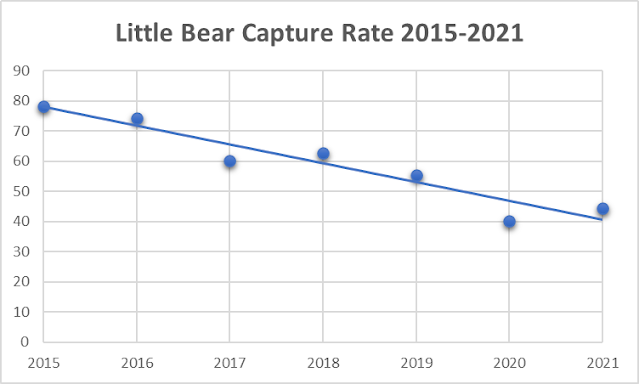 There were 5 days when over 100 birds were banded.  The best day of the season was on 10 October when we banded 140 birds and had 9 recaptures.  The next two busiest days occurred 17 October and 24 September when 123 and 112 birds were banded, respectively.

We captured five species never banded at Little Bear during the fall:  Barn Swallow (1), Red-bellied Woodpecker (2), Merlin (1), Great Crested Flycatcher (1), Brown Creeper (2).  Barn Swallow, Red-bellied Woodpecker, and Merlin have never been banded at either site during the fall before. I was surprised to see that Little Bear had never captured a Great Crested Flycatcher before considering Captain Sam’s has banded 55 of them.

Species notably absent: Marsh Wren.  After banding 2 each of Chuck-will’s-widow and Eastern Whip-poor-will last year, neither species was captured even though both were present around the banding the site.

Without the cooperation of many people and entities, this work would not be possible.  The success of this project relies on their commitment, and I am in a debt of gratitude to everyone involved.

First, I'd like to thank my awesome team of banding assistants (Kristin Attinger, Josh Lefever, Kandace Glanville, Ben Stalheim, and Nate Watkins).  Their hard work over the course of this long season was outstanding.  It was a great season, and I would like to wish them all the very best of luck in the future.

Volunteers were welcomed back to the banding station this year, albeit to a much lesser degree.  David McLean, Chris Snook, Cathy Miller, Michael Gamble, Nancy Raginski, Alex Sharp, Brendan Wang, Amy Given, and Aidan Given all donated a considerable amount of their time (more than 10 hours each) to help out.  We also had several others that came out for just the day. I’d like to thank all the volunteers that made it out this year. Because of their help, we can operate a more efficient banding station.

Please note that these numbers are preliminary and may change after the date has been thoroughly proofed.