The morning gifted us with some mild temperatures and a gentle breeze, making this a very pleasant day of banding. We had 26 new birds and 5 recaptures. The water level on the trails were slightly higher than average. We caught a hatch year Eastern screech owl that was in very heavy body molt, check out the new feathers coming in on the birds head in the picture below. We also caught two red eyed vireos, one hatch year and adult bird. During fall migration, one way of aging these birds is by looking at the color of their eyes, the immature birds will have a brown eye, the eyes will change color to red while down in its wintering grounds. (see the comparison below). 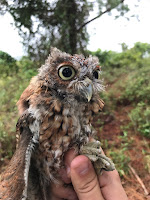 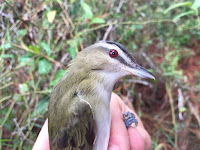 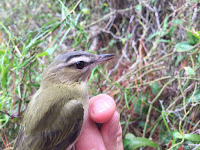 We also caught an adult male painted bunting that was banded as a hatch year in August of 2012 during a different project involving color bands for a population study.

Little Bear
It was our second best day at Little Bear with 20 new birds and 9 recaptures of 11 species. We were greeted with a chorus of calling frogs that we could hear as we were walking to the banding station, letting us know it must be pretty flooded at the site. There ended up being about a foot of water around our nets and trails, which we expected from all the rain we received yesterday. As I went to open the first net, the frogs were deafening. It was incredible and something I haven't heard in my previous years being out there.

Also, we caught a Black-and-white Warbler and a Black-throated Blue Warbler on the last net run. These were firsts for Little Bear but already captured at Captain Sam's. Hopefully tomorrow brings us more migrants as the storm off the coast pushes further north.