Another slow one out on the "Spit".  In 4.3 hours we only captured 9 new birds along with 9 recaptures of 10 species.  Rising temperatures forced us to close down a bit early.

There is a good bit of standing water still around the station.  We have been watching thousands upon thousands of mosquito larvae squiggling around in our walking trails for a few days now (and yes, I have been trying to stomp on them every chance I get).  Today many of the larvae emerged from the water as free flying forms.  As the winged adults emerge, they just sit on top of the water for a while (another great opportunity to stomp them back into the mud).  In the pic below, you can see the newly emerged adults on the surface of the water as well as a lots of larvae in the water.  The next week or so will prove to be a challenge and test everybody's tolerance for these little blood suckers. 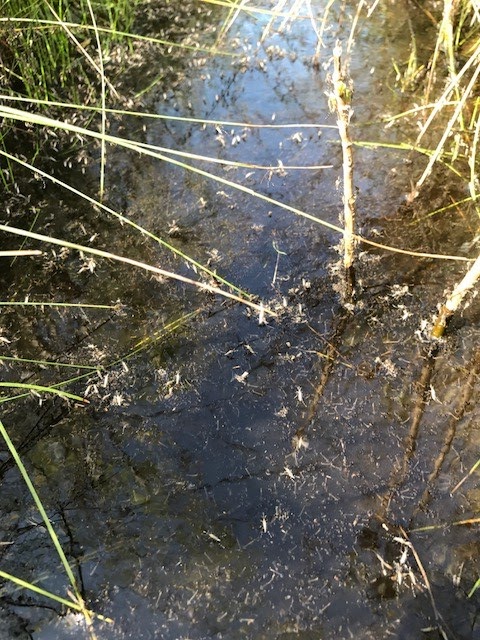 
The hot and humid weather of August has followed us into September.  The overnight winds continue to come from the south and are not very conducive for sparking fall migration.  That being said, it comes as no surprise that banding was fairly slow this morning with 17 new birds and 3 recaptures.  Despite the low numbers, we had a good species diversity with 11 species being represented including our first of the season Northern Mockingbird.  Hopefully a cold front come through and change this weather and ultimately spark the fall migration.