Captain Sam's
Early rain showers and threatening storms forced us to open a little later than usual and close early. With a tighter window for catching birds and only some of our nets open, we had a very slow day with just two new Northern Parulas on the same net run. We had plenty of time to admire this lovely species, of which we had two hatch-year birds, one male and one female. Like many warblers, Northern Parulas exhibit some degree of sexual dimorphism. The overall pattern and coloration is roughly the same between male and female, with the males having a few bolder/brighter features. The most easily distinguishable feature is the bold black and reddish band across a bright yellow breast in the male, compared to a more muted band in a female. In hatch-year birds these features are more subtle, but a young male will still have some reddish in the breast. 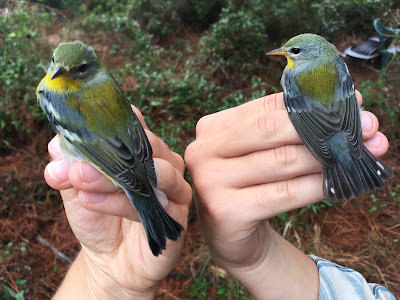 Little Bear
Our morning started with a rain shower and was ended with the threat of thunderstorms.  We had our nets open for less than 2 hours and in that time frame we captured 2 new birds, a Swainson’s Thrush and a Painted Bunting, and recaptured a House Wren.   Sadly, it seems this weather pattern is going to stick around for the next few days and we will continue to see low numbers of migrants moving through our area.