As predicted by radar, last night had little to no avian migration along the coast. With mainly south winds, birds found conditions unfavorable for migration. Thus, we only had 9 new birds and 4 recaps today. However, with coastal storms predicted and favorable wind conditions to our north, we should expect high numbers tomorrow. This depends on multiple factors such as when and where the storms hit. If storms hit just to our south or over Kiawah, we may have potential for fallouts, causing birds to land along the coast. If storms form to our north, we may have little movement around Kiawah, as most birds could be stopped before reaching our sites. Overall, we should see some movement tonight and an increase in numbers due to westerly winds. To see how radar and weather patterns are used to model bird migration, check this link.

The day started out windy causing us to close the exposed nets. When the wind calmed and we re-opened those nets, the clouds dissipated and the sun came. Heating up quickly, we had to close all the nets. We ended the morning with a total of 12 new birds and 6 recaptured of 11 species. We heard a flock of Bobolinks flying over and were hopeful they'd come down to our nets, but it didn't happen today. While leaving the site, there were about 40 hanging out in the grassy areas. Our most exciting capture today was the first Brown Thrasher for Little Bear! It was nice and calm allowing us to photograph it. I also finally got to see a Yellow Warbler with a little bit of orange streaking on the breast. Hatch-year males or older females will both show slight orange streaking. The one today was a hatch-year male. 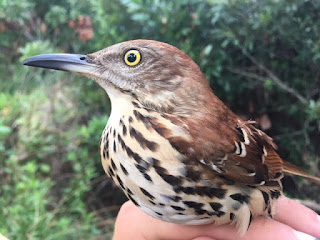