The cold front has moved on and we're back to warmer mornings with less bird movement. Today we caught 50 new birds and 21 recaptures of 10 species. In the beginning of the season, this would have felt like a good day, but after our last few days being over 200 bird days, this felt slow. We were lucky enough to recapture the Swainson's Warbler from yesterday! This was a lifer bird for me and several other banders. With wind conditions that aren't ideal for migrating and no fat reserves, we think this bird and others around will wait until the next cold front later this week before continuing on with migration. In the meantime, they will rest and eat a lot to store up fat. We also caught our first of the season Orange-crowned Warbler! 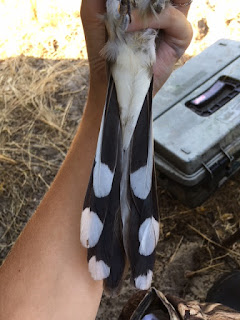 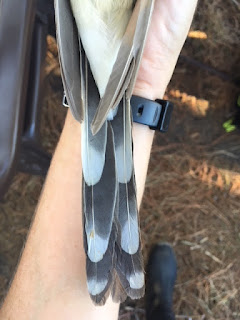 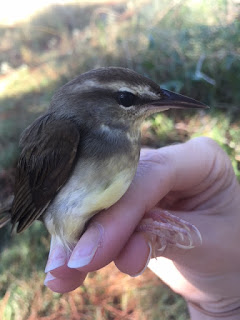 Besides the good number of birds cold fronts bring, we are also looking forward to cooler weather later this week. Being back in the mid-80's by mid morning doesn't allow us to keep our nets open as long.

Today was a little warmer than usual. We did have an unusual amount of Blackpoll Warblers today. There was a total of 2 today! It was extremely exciting because Blackpoll Warblers migrate by the ocean to get to their wintering habitat. They rarely show up when the ocean weather is bad, pushing them towards the land. It was a blast to see 2 in one day!