The First Major Cold Front of the Fall Delivers

Our crew was hoping for a huge day today after Hurricane Michael passed to our north and a strong cold front moved in from the northwest.  We weren't disappointed and banded 276 birds along with 21 recaptures of 32 different species. The first net run totaled over 100 birds and a nice diversity of species. First of Season (FOS) birds included Black-throated Green Warbler, Bay-breasted Warbler, Magnolia Warbler, Yellow-rumped Warbler, Rose-breasted Grosbeak, Eastern Phoebe, Wood Thrush, Gray-cheeked Thrush, and an adorable Red-breasted Nuthatch. I was surprised how small the Nuthatch seemed in hand. We also had a good push of thrushes including one Gray-cheeked Thrush (GCTH), 16 Swainson's Thrushes, and 2 Wood Thrushes. When you compare with a Swainson's, GCTH have less of an eye ring and no buffy coloration on the throat, lores, and chest. This GCTH was one of the fattest thrushes I have ever seen, bulging with fat under his wings and furculum. He likely had been building his energy reserves and waiting for the cold front to pass on by. Northwest winds continue tomorrow night, and we are hoping for another huge day. It may be worth checking your local birding areas tomorrow AM. 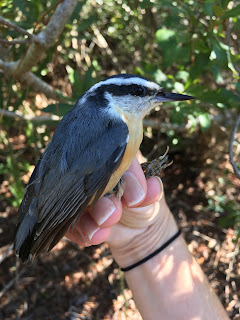 Banding was fantastic today, with a grand total of 181 new birds banded and 4 recaptures! Our total species tally came to 29, and included some awesome FOS birds. Ruby-crowned Kinglet, Wood Thrush, White-crowned Sparrow, Magnolia Warbler, and Rose-breasted Grosbeak were all new birds for the season, while a Tennessee Warbler and Eastern Wood Peewee were new birds for Little Bear. I was especially excited to get to band my first Hooded Warbler today, and an after hatch-year male no less! With temperatures and humidity much lower than they've been the entire season, it has actually begun to feel like fall here, which kept us all a little more energized during the day. The cooler weather and high volume of birds banded were a result of a cold front coming in from the Northwest-- the same cold front that pushed Hurricane Michael east through the southeastern U.S. after it made landfall in Florida.While we did have some debris to untangle from our nets this morning, overall, the hurricane did very minimal damage at both our banding sites, which meant we could start banding early this morning. As this cold front continues to bring us northwest winds, we expect to have a similar day of banding tomorrow, or perhaps even better-- fingers crossed!

Posted by Joel Throckmorton at 9:33 PM