We had a great diversity of birds today that we got to share with the visiting Charleston County Master Naturalist class. They were able to come out for a couple hours this morning to observe and learn about the banding process. It's always fun educating the public about the importance of long-term banding projects and they were excited to see birds up close in the hand. This morning we caught a total of 40 new birds and 12 recaptures of 15 species. Though not our first of the season, I was thrilled to get to band my first Northern Parula! Northern Parulas often forage high in the canopy, but will come lower during migration. There is an interesting gap in their northern breeding range possibly due to habitat loss and air pollution, which affects the growth of moss on trees that they depend on for nesting (Cornell Lab of Ornithology All About Birds). Another cool catch today was a recaptured Gray Catbird previously banded by Aaron on October 12, 2016. 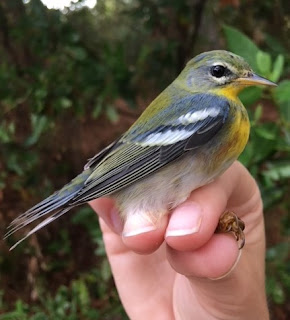 The wind cooperated today and we were able to keep all of our nets open for most of the morning. We ended up with 33 new birds and 11 recaptures of 9 species. We caught another beautiful adult male Cape May Warbler, but the highlight of the morning were the recaptures. We recaptured a Northern Cardinal that was banded on 9/8/2015, the first year of the Little Bear banding station. We also had a Painted Bunting and two Gray Catbirds that were banded in 2017. The Painted Bunting was banded on 9/3/2017 and the two Gray Catbirds were banded on 10/3/2017 and 10/11/2017, only 8 days apart!