I was surprised by the amount of bird activity today.  I figured the rain that we had overnight would have prevented many birds from getting to us.  It was not a busy day by any means but busier than I thought it was going to be.  We banded 42 new birds and had 19 recaptures of 20 different species.

This fall has been one of the slowest in terms of birds banded in the past several years if not ever.  We are starting to get our "winter birds/late migrants", and I was curious to see how some of those species numbers compared to previous years.  It seems that many of them are down as well.

The following table shows the total number of individuals for each species as of 8 November for a given year.  Yellow-rumped Warblers and Ruby-crowned Kinglets are way below the average.  Hermit Thrushes and Swamp Sparrows are also below average.  Maybe some of our "winter birds/late migrants" are just late this year and they will start arriving soon.

The overcast sky and cooler temperature was very pleasant throughout the morning. There were a lot of birds calling around the station and even more flying over. It was a slow beginning to the day, but picked up as the Yellow-rumped Warblers came down and found our nets. We banded 44 new birds and recaptured 6 of 12 species. Aside from finally catching a good number of Yellow-rumped Warblers, Little Bear also caught it's first Wilson's Warbler and Field Sparrow for the season. It was my first time to see a Field Sparrow in the hand! Having only banded out West, this season has been full of new species for me to band and learn more about aging and sexing different species. Getting a new species like the Field Sparrow makes the day that much better! 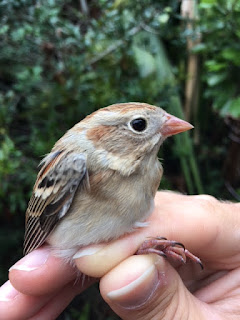 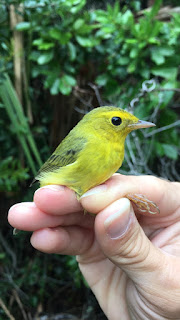