Birds are Falling from the Sky

Raindrops are falling on our heads here on the island, so we didn't band today. Instead we slept in, cooked a hearty breakfast, and started packing for our journeys home.

PS - I just wanted to point out that contrary to what some of you told me earlier this season, South Carolina does have beautiful fall colors! 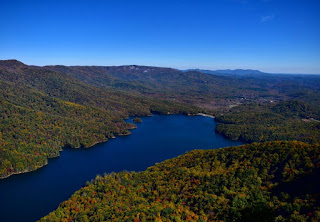 Unbeknownst to the rest of the crew, I decided to go out to Captain Sam's this afternoon after the rain to get the bird bags so they could get washed one more time before the end of the season.  I also had an ulterior motive, and that was to see if the Tree Swallow flock was out there.  After several close encounters yesterday, I really wanted to try to capture some before everybody leaves this weekend.  When I arrived I opened up 9 nets and seemingly like clockwork, a small flock of a couple hundred swallows flew over the banding station.  Similar to yesterday they flew down to the end of the spit to "get organized".  After forming what we sometimes call a "swallow-nado", they disappeared and I did not seem them again during my short time out there.  I did manage to catch 4 birds in a little less than an hour and a half:  2 new Yellow-rumped Warblers, 1 new Swamp Sparrow, and 1 recaptured Ruby-crowned Kinglet.